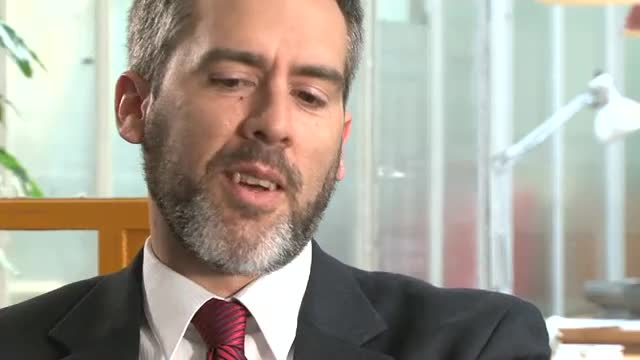 In terms of what could happen in the near future, or, what's some of these buzzwords that I like to string together: mobile, augmented, geo special, locative, contextual, virtual simulations - I could keep adding more. But you have to look at them all together, take them apart and understand what each one brings to the table to really get a better view of the longer-term implications of how it can affect other things.
If you look at the industry from an entrepreneurial or venture capital standpoint and see who's out there thinking about things or they're trying to get a start-up going or maybe they have a small company working towards things, you can get a feeling for a natural progression of how long it's going to take some things to happen. But when we start looking at some of the more exciting things that are new, whether it's the geo specialists or the augmented reality, there's little camps and little start-ups and individuals that are beginning to flare up, that have this hunger and drive and passion. We're tired of waiting around for Google or Microsoft to do it. I like to joke "We were promised flying cars and moon bases by 2000. I'm not on Mars or the moon yet, so I'm a little upset." But it's guys like us who are out there and we're done waiting. We see how all these technologies are suddenly becoming accessible and now we're trying to figure out how do you put them all together and where can we go from there. So when you mix all that in a bowl, those people and those start-ups become like accelerants on top of the whole process. So something that might normally take three or five years to get somewhere is now happening in one to three years, or even shorter.
An interesting comparison in this is how new technologies and new companies are adopted by the end-user. You can look at social networks for example and compare something like Friendster to MySpace to Facebook to Twitter. When you track the user adoption rates, each one gets shorter and shorter and broader each time, so I think that inverts, somewhat, the aspect in the technology development sector for all these things we talked about, there's beginning to have these little fires that are lit by very ambitious people that aren't constrained by large corporate bureaucracies or academic and governmental politics.

A Beginners Guide to Kissing

How to Get Children to Enjoy Eating Vegetables